Standardisation and standardization committees are an often forgotten channel for dissemination. Standardisation is an important contribution to the development of technology (as well as to other societal areas) in general and is a highly international way of working. There are several standardisation organisations. ISO is perhaps the most well-known. For the electronic and electrical field there is IEC, International Electrotechnical Commission. IEC in turn, is consisting of a huge (>100) number of Technical Committees, each devoted to a certain topic. SUITCEYES was 22 May 2018 invited to speak for TC 100. TC 100 is devoted to visual and audial multimedia (TV, radio, broadcasting). TC 100 wanted to inform themselves on potential, new areas for their standardisation work and haptic communication was one of these.

We were given generous 25 minutes. Undersigned described the origin of SUITCEYES, who we are and where we are heading.  Even if we have just recently started some results were mentioned. The focus was on haptics and haptic communication. It seems as if it was new to many in the audience. Ca 30 persons, many from Japan and South Korea.

The speech led to a number of small chats and visit card exchanges. Large companies as Panasonic and Sony are members and active in the TC and showed interest in our work. Here also potential new members of our Advisory Board might be found.

Of special interest was that also three other H2020 project were presenting. Among these Insension. Insension has run for a couple of years already and is devoted to enabling people having profound learning disabilities interacting with digital services. Not only is it the case that some of the questions and research methods we have in SUITCEYES overlap with those in Insension also Harpo is taking part in both. Even if not deciding anything the communication channels are established. Loose discussion of meeting each other for example when SUITCEYES having meeting in Poznan. There will also be a follow up with an interview for their magazine or newsletter.

It could also be noted that undersigned take part in the Swedish chapter SEK, “Svensk Elstandard” who is member of IEC and in the work of SEK on wearables and IoT.

This site uses Akismet to reduce spam. Learn how your comment data is processed.

Workshop At Eurohaptics 2020 in Leiden

Hands-on Workshop on Assistive Technology for Persons with Deafblindness.

Thank you @CNRHR_Cresam 🇫🇷 for extending our invitation! Hope to hear soon from the #deafblind community in France. Here is the information in English 👇
@suitceyes
@EU_H2020 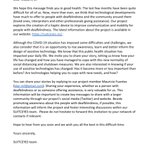 Thank you @WFDeafBlind for sharing!

The World Federation of the Deafblind@WFDeafBlind

Today is International Day of #Deafblindness, marking the birth of Helen Keller on June 27. We will continue advocating for the rights of persons with #deafblindness and raise our voices to ensure our full inclusion in society. Read more on our website: https://www.wfdb.eu/2020/06/26/june-27th-a-historic-day-to-acknowledge-the-rights-of-persons-with-deafblindness/