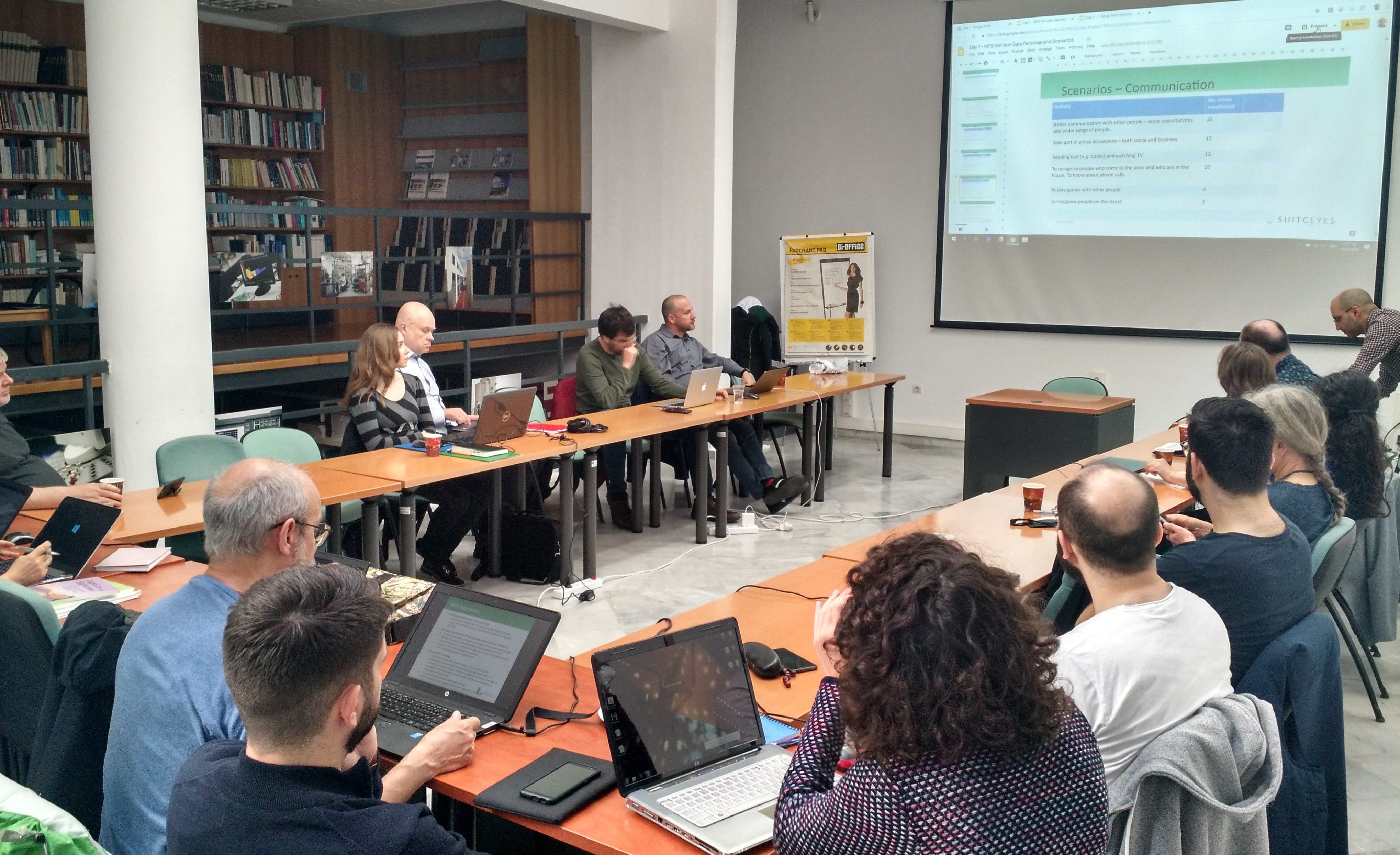 The third 3-day consortium meeting of SUITCEYES was held on 15-17th of April 2019 in Thessaloniki, hosted by the Center for Research and Technology Hellas (CERTH). During the first day of the meeting all project partners were warmly welcomed by Stratos Kontopoulos from CERTH and the progress in all Working Packages (WPs) was presented.

Subsequently, the project coordinator, Nasrine Olson and WP1 leader, Jan Nolin started with briefly summarizing what has happened since the last plenary meeting and gave an outlook on the aims for the next months. Ray Holt from University of Leeds (WP4) and Stratos Kontopoulos from CERTH (WP3) talked about technology-based perception of the environment and Nils-Krister Persson (WP5) from University of Borås demonstrated an updated version of the prototype which could be used for testing in the near future. 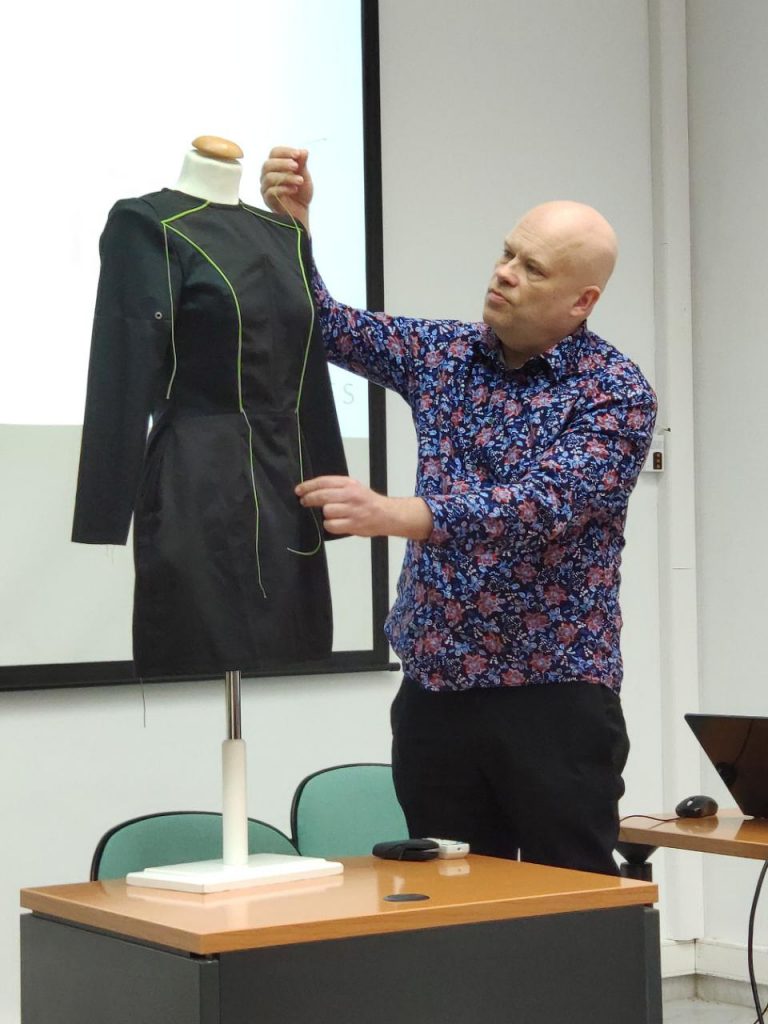 Myrthe Plaisier from Eindhoven University of Technology summarized the last experiments performed within WP6 and Rúben Gouveia from Offenburg University introduced the work in gamification of WP7. At the end of the first day Sarah Woodin from University of Leeds presented reports from user studies, personas and scenarios created within WP2. She presented an outline of the results of approximately 90% of the conducted interviews. Based on the findings the consortium attempted to define scenarios to focus on with regards to
i) navigation issues,
ii) communication issues.

The consortium has decided to move forward with face recognition (inside or outside), as well as recognizing people who, e.g. ring at the door (via the assistance of beacon technologies). Additionally, emotion recognition may be considered, given that suitable open source solutions are available. It was further noted that playing games with other people ranks low when it comes to the perceived needs of people with deafblindness. This could either mean that gaming is confined to learning about how to use the Haptic Intelligent Personalized Interface (HIPI) or that perhaps gaming should be explicitely introduced to end users – when gaming becomes a
possibility in people’s lives again its importance will increase for end users. The consortium ended the day with a city tour of Thessaloniki. 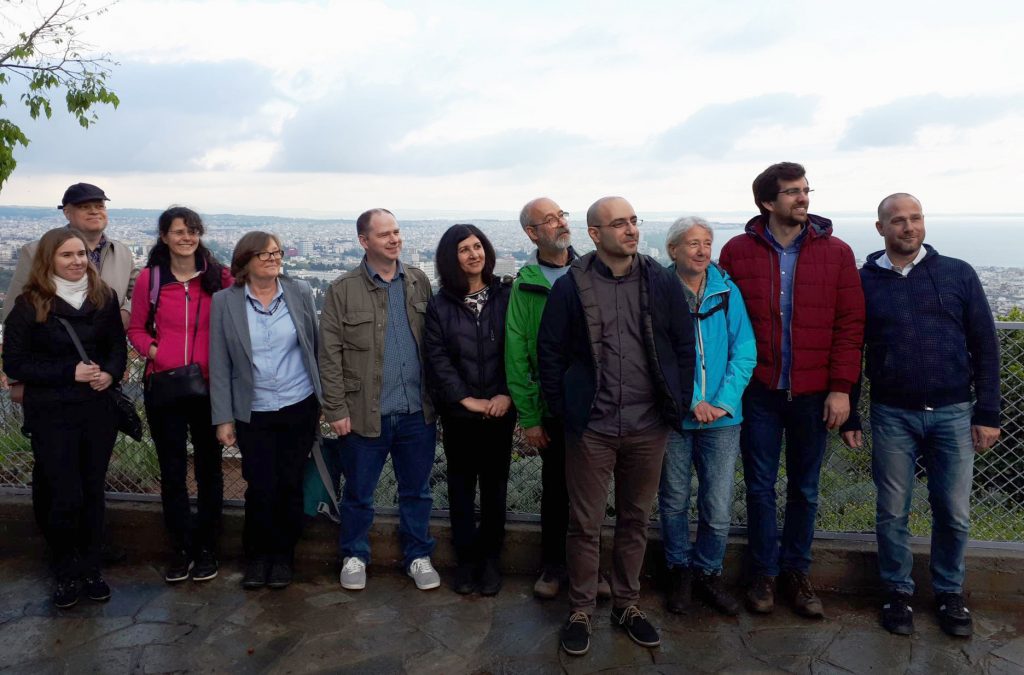 The second day of meeting started considering more technical aspects of technical integration. An overview of the pub/sub communication protocol was presented to the partners. The demonstration of the pub/sub main principles was aimed at the establishment of a common understanding between technical partners regarding the planned system integration and service-to-service interaction. A popular pub/sub service which was chosen for early development stages was discussed and an overall system architecture was presented to the consortium. After presenting the draft system architecture (open to some changes), a way to handle sub communication by providing an early communication paradigm for the Visual Analysis – KBS flow was showcased. Along with the integration challenges the partners also discussed about how the visual analysis (face recognition, object detection) can operate inside each possible scenario. Perceived challenges were also considered.

That day a WP8 workshop about dissemination and the website was leaded by Joanna Starosta from Harpo and Mauricio Fuentes from LDQR. The achievements were summarized and further plans and activities in the field of dissemination and sharing the results from particular WPs were discussed in the workshop. We also outlined the new edition of project’s newsletter. Oliver Korn from Offenburg University presented the publications planned for the near future. Discussions ensued about planned publications in the project and how project partners could best collaborate to produce joint publications.

The third day of the meeting was based on finalizing scenarios for the review in August, i.e. what will be presented during the review and at the symposium. Discussions on legal aspects/policy issues were initiated as well: how to handle the issue of data and personal information gathered by the sensors, as well as how the consortium might make use of information gathered for research purposes.

Many thanks to the CERTH-team for the impressive organisation of the meeting and the great hospitality!
Further, thanks to all consortium partners for such a constructive 3-day meeting!

This site uses Akismet to reduce spam. Learn how your comment data is processed.